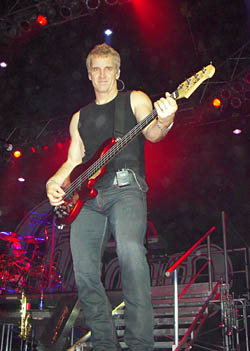 Jason Scheff, bassist for the legendary band Chicago, contacted us several weeks ago after seeing the Long Trail Mag bass in The Robb Report. A few emails and visits to our respective MySpace pages later, Jason kindly arranged complimentary tickets (12th row center) and backstage passes for my family and me at the July 6 show at the Meadowbrook Pavilion in Gilford NH.

A brief meeting backstage before the show allowed Jason to check out our white 5-string Long Trail Mag. Jason asked some great questions about the bass’ construction, electronics and design. We also discussed the prototype hybrid (mag/piezo) bass we’re building for Nashville bassist Dave Pomeroy. Jason is a long-time Lakland player, and he sported a beautiful red 4-string Lakland during the show. 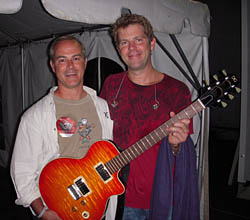 The show was remarkable, and Jason’s bass playing complimented the classic Chicago repertoire perfectly. Not only did he replicate many of the classic bass lines of Peter Cetera in Chicago’s older material, but Jason added creative flourishes and contrapuntal lines in both old and new Chicago songs that underscored his skill as one of the top bassists in rock today.

Following the show, we were invited to a VIP ‘meet & greet’ backstage. Jason introduced me to Chicago guitarists Keith Howland, who expressed genuine interest in the sunburst Equinox H guitar we brought. Keith played a couple Strat-style guitars during the show, but admitted a soft spot for humbucking-equipped guitars. Chicago drummer Tris Imboden caught a glimpse of the F-clef soundhole on the Long Trail Mag and said, “That bass has Scheffy written all over it.”  We think so too, Tris!

Thanks, Jason & the guys, for a memorable evening of music and camaraderie. 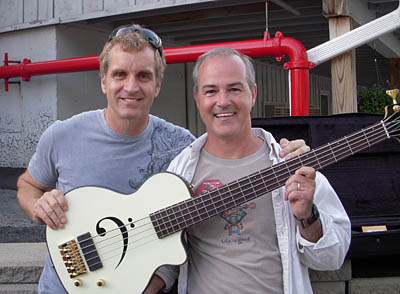