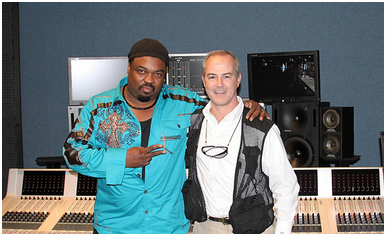 Derrick “Dock” Murdock arranged for an unforgettable VIP experience for his guests from DeMars Guitars and TC Electronic at a recent taping of The Jay Leno Show, at Studio 11 at the NBC Studios in Burbank CA.

Dock’s 5-string Long Trail Bass was at his side all night as The Primetime Band, under the direction of guitarist Kevin Eubanks, played crowd favorites such as “Dance to the Music” and “Signed Sealed Delivered”, among others. Guests on the show that evening included actor Colin Firth, First Lady Michelle Obama (via satellite link), Arsenio Hall and Leno comic foil Ross Matthews. We had a great time talking with drummer Marvin “Smitty” Smith and saxophonist Ralph Moore.

Following the show, Dock arranged to have photographs taken onstage and conducted a “behind the scenes” tour of Studio 11, including the audio mixing room, dressing rooms, makeup/wardrobe and other support functions. We then all retreated to a nearby Mexican restaurant for dinner and margaritas, compliments of our friends from TC Electronic.