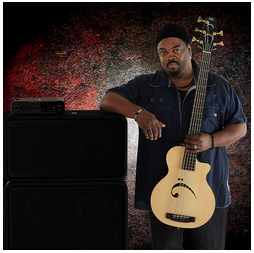 Bassist Derrick Murdock – known as “Dock” to his many friends – has a secret weapon in his bass arsenal. No, it will not inflict serious physical damage, unless your ears are too close to his speaker cabinet at a live gig. His weapon sports 5-strings, a bookmatched Englemann spruce top, an innovative dual-piezo pickup system and a rosewood fingerboard: his DeMars Guitars Long Trail 5 (serial # LF009S5).

His secret weapon also has a new home. Dock is the long-time 4-string sidekick to guitarist Kevin Eubanks with NBC’s Tonight Show and now holds down the low end with Eubanks’ Primetime Band on The Jay Leno Show, seen weeknights at 10:00pm EST on NBC. Dock is excited about the new show and format: “We have a new stage, a new setup, new mixers – a whole new sound. I’ll tell ya, though – we’re rehearsing all the time. The show tapes from 4:00-5:00pm and our normal call time (when they have to be at the studio) is 1:00pm. Lately we’ve been getting there around 10:00am to run through tunes, but we’re having a blast.”

Dock (who has delivered the low end for Sheena Easton, Tom Scott, Michael Bolton & Gladys Knight, among others) is one of the fortunate bassists who plays different musical styles every night – by choice. In addition to playing the show’s signature theme song, the PrimeTimers are well versed on every type of popular music – from hard rock to ballads to hip-hop to standards to country to jazz – often short 10-second snippets played during guests’ onstage introductions (play on’s). Occasionally, a singer will guest on the show and the Primetime Band will provide live backup. “We usually have charts, plus we have rehearsed beforehand, so backing up a singer is easy and a lot of fun. The band plays together so much anyway that we can all read each other pretty well. Kevin keeps it really loose and fun, but we have to be on our toes for a spontaneous cue from him. Even though it’s taped for broadcast, this is live TV – we get no second chances!”

Dock also gets to hang with the bassists from bands who guest on The Tonight Show and Leno’s new show. Part of the fun is when he shows off his DG Long Trail 5 bass to the bassists from other bands. “These guys take a look at my bass and they just smile. Then they hear it and their jaws drop. Then I let them play it and they are speechless. Jamie Foxx had his band on a couple weeks ago and I showed it to their bassist in the green room. Man, he LOVED it! Didn’t want to give it back!“

Dock’s gigs don’t end at the NBC soundstage. He is a busy session bassist in Los Angeles and gigs regularly with the Kevin Eubanks. “We have a pretty solid following and the repertoire is always different: some funk/R&B, some jazz, some rock…even some country. Just like the show!”

Secret weapon, huh? With primetime exposure five nights a week and a busy gigging schedule, the secret’s out…