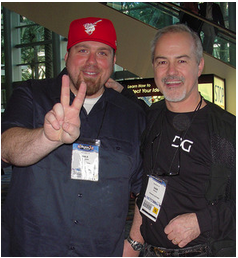 NAMM 2009 did not see a DeMars Guitars booth, but that did not diminish our presence at the show. Both the number of exhibitors and attendees was reported to be lower than previous years, but the level of excitement over new products was as high as ever.

Mark Wright, president of AccuGroove bass cabinets, was kind enough to feature one of our 4-string Long Trail basses at their booth. He noted that they wanted “an awesome piezo-loaded bass” to highlight what their bass amps/cabs could do. Needless to say, the Long Trail got quite a workout over the 4 days of NAMM and the AccuGroove amps brought out every sonic nuance of the Long Trail. Thanks Mark!

The new Equinox B electric guitar (translucent orange finish over a AAAAA-grade flame maple top, with all gold hardware) split time between the D’Addario booth on the main floor and the TV Jones pickup booth downstairs in Hall E. The Bigsby-equipped Gretsch-inspired Equinox B sports D’Addario’s PlanetWaves AutoTrim tuners and EXL110 strings (0.010-0.046) as well as the TV Jones Classic pickups, inspired by the Gretsch FilterTrons of the 1950s. This guitar was also played at the Marriott & Hilton lobby bashes on Friday and Saturday nights by guitarist Dale Drinkard of the amazing Muscle Shoals AL band, The Uglistick.

New friends made at the 2009 NAMM show include Jason Beatty, Steve Campbell & Scott Campbell from the Trillium Amplifier Co. What breathtaking amps sonically pristine and visual works of art.