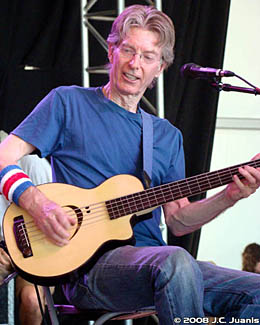 Phil contacted Dan after reading the feature about the DG instruments in the May 2008 issue of The Robb Report and seeing the instruments in the music media like Bass Player magazine. Dan said, “It was quite a surprise when Phil called. The unbelievable part is that about 10 minutes before his phone call, I’d been playing one of my basses in my music room along to “Shakedown Street” on my iPod. Phil had some great questions about the design and build of the instruments and was intrigued with the dual-channel piezo transducer arrangement in the Long Trails. He noted that he had been playing some upright bass in his shows, but was searching for a better alternative. Fortunately we had a new fretted 5-string still in our unsold inventory and I shipped it out to Phil that day. Please note that Phil purchased his bass – this was not any sort of quid pro quo endorsement or giveaway deal.”

The new bass was unveiled to the public at Phil’s June 15 acoustic show at the Bonnaroo Music Festival in Manchester TN. Dan smiled, “I would’ve loved to have seen and heard classic Dead songs like “Friend of the Devil” and “Ripple” played on one of my basses that day.”

Phil and Dan met (photo) at the June 22 “Phil Lesh & Friends” show in Gilford NH. Dan notes, “Phil arranged for my wife and me to come backstage during their intermission. We spent about twenty minutes discussing everything from bass strings to the challenges – and joys – of raising sons. He is an absolute gentleman and a new friend. I am both honored and humbled that a bass giant like Phil would choose to play our Long Trail.”

There has been plenty of Internet chatter about Phil’s new bass: the chatroom Philzone.org has taken notice of “Phil’s New Geetar” and a YouTube clip of Phil playing Dire Wolf on his new Long Trail at Bonnaroo is available as well. More photos of Phil playing can be found at the Bonnaroo website. 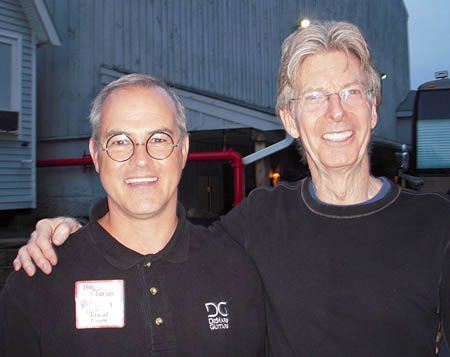