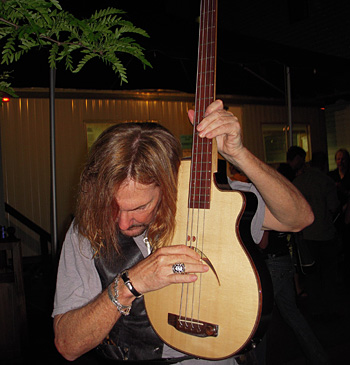 On a warm June evening at the Bank of America Pavilion on the Boston shore, the two bassists for Styx – Chuck Panozzo and Ricky Phillips – had the opportunity to check out a 4-string Long Trail bass backstage before and after their concert. How did this come about? Dan DeMars fills us in…

Styx was – and still is – a band composed of talented songwriters and dynamic entertainers. I have always been attracted to bands who can sing multi-part harmonies as well as play their instruments and Styx does that as well as any rock band in the business. Styx also embraces several musical genres and incorporates them well into their music – from the theatrical leanings of (former keyboardist and Styx co-founder) Dennis DeYoung to the Hendrix-inspired hard guitar rock of James (JY) Young to the acoustic-oriented creations of Tommy Shaw. Supporting all this was the bedrock work of the Panozzo twins, drummer John and bassist Chuck. Sadly, John passed away in 1996 and Chuck’s involvement in the band has been sporadic over the past two decades due to chronic illness. In the late 90s, former Styx guitarist Glen Burtnik was hired to cover Chuck’s bass parts and in 2003, the band hired bassist Ricky Philips (ex-Babys and Bad English). Chuck’s illness has been well-managed and his health has steadily improved over the years allowing him to still travel with the band and play several songs in their concerts while Ricky switches over to a double-neck guitar.

I had the opportunity to meet with Chuck for about an hour at the band’s hotel on the afternoon of their Boston show. In addition to talking about bass guitars, we shared stories about the history of Styx, certain songs and bass lines, life on the road, past Styx concerts I had attended, antiviral drug development and biomedical research, as well as serving as altar boys in our respective Catholic churches. Chuck and I reviewed the product literature and he had some great questions about the DeMars basses, particularly the Long Trail Mag, which produces both electric and acoustic 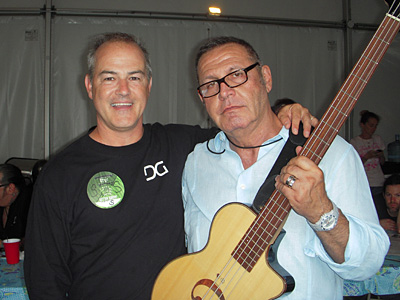 timbres in the same instrument. Chuck plays a beautiful 4-string Sadowsky bass in the Styx concerts, but admitted that he’s always interested in finding out about new instruments and expressed interest in buying one. As a graphic artist and designer of several Styx album covers, Chuck quickly picked up on the invertible “DG” logo and the bass clef sound hole and commented on their uniqueness. Incidentally, Chuck is also an accomplished author, having penned a candid and well-written autobiography on his life, his time with Styx, his struggles as a gay man, and his health complications due to HIV and AIDS. The book, “The Grand Illusion: Love, Lies and My Life With Styx”, is available via print or Kindle at amazon.com.

Chuck kindly provided four complimentary tickets and backstage passes for my family and me and even provided a guided tour of their bus! At the concert, both Chuck and Ricky had an opportunity to see and play a 4-string Long Trail bass. Both commented on its beauty, ideal weight/balance and simple design. Unfortunately there was no practice amp to be found in the “meet & greet” area backstage, so both bassists played the Long Trail unamplified which did not give them an appreciation of its tone, but certainly allowed them to get an idea of its playability, construction and quality.

My thanks to Chuck (and Ricky) for a memorable evening with Styx. The band is on the road through the summer of 2010 with Foreigner and Kansas and their tour schedule can be found here and a creative and funny (Dylan-esque?) video on the tour here. 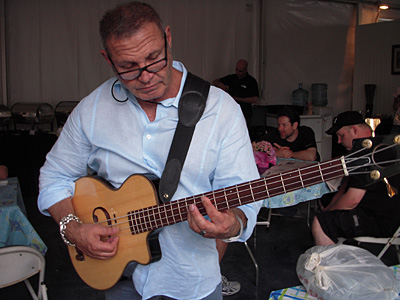