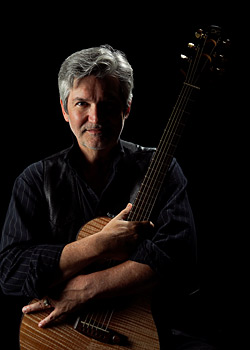 Legendary central New York rocker Todd Hobin has recently become the proud owner of a DeMars Viridis acoustic/electric guitar. That alone shouldn’t be too much of surprise, considering the long history between the Todd Hobin Band and Dan DeMars. “Indeed it is has been a long road for the two of us”, notes Dan DeMars, “but one that has a pleasant yet unexpected destination.”

The Todd Hobin Band has its roots in the recording studios and classrooms of the Crane School of Music on the campus of the State University of New York at Potsdam back in the early 1970s. Todd met guitarist/keyboardist and vocalist Doug Moncrief and the rest – as they say – is history. The original iteration of the THB – Hobin, Moncrief, guitarist Bruce Fowler, bassist Desi Desnoyers and on drums, Todd’s brother Shawn – recorded several albums from 1977 through the early 1990s, touring the east coast extensively and providing opening concert sets for numerous nationally touring bands. After a number of years when bandmates followed other careers and raised families, the THB reunited in 2005 to rave reviews. The band – with Todd’s son Brett now handling bass duties – plays a select number of live engagements every year, mostly in and around the Syracuse NY area the band calls home.

Dan has been a long-time fan of Todd and the band. “I saw them numerous times in the late 70s and early 80s and had all their albums, which I played constantly in my college dorm room. They used to close their live shows with CSNY’s ‘Suite: Judy Blue Eyes’ and I was always knocked out by their arrangement and tight vocal harmonies. Flash-forward several decades to November 2008 when my wife hired the THB as the entertainment for my surprise 50th birthday party. The real fun was a set of cover tunes that Todd and a few of my musician friends arranged for us to play together some Beatles, Eagles, Doobies and even a couple Hobin originals we knew. What song did we close with? ‘Suite: Judy Blue Eyes’with a 7-part vocal harmony! I’ve never had any real desire to be a performing musician but any interest I may have had was fulfilled for a lifetime with that one set.” 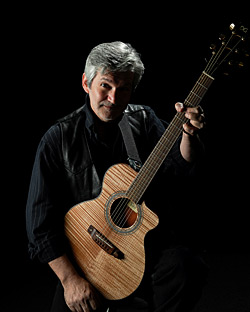 When Todd learned about DeMars Guitars at the party, he was intrigued. Having played his trusty but road-weary Washburn acoustic guitar for so many years, Todd was interested in trying something new and different. Todd discovered the Viridis and we can report a happy marriage of the two. The best advertisement of any product can have is the objective opinion of a customer. And Todd isn’t just ANY customer. We had the unique opportunity to sit down with Todd and get his candid thoughts on his new guitar:

Todd, tell the world about your new guitar.

Most people don’t know that this particular Viridis came to me through the hands of a rock legend. Steve Miller road-tested this little flame maple beauty before me. (Yes, that Steve Miller) His front of house sound tech even blessed it with some sweet words of praise. But first I wanted to put this gorgeous piece of wood to the test in the laboratory known as Studio B. Lots of amps, lots of bazillion dollar mics, oscilloscopes, digital recording and playback in a perfect listening environment. Why not spec it out to the nth degree?

Look at this thing!!! It’s beautiful. It plays like a dream. It looks even dreamier. It feels like a light, skinny electric guitar. All the wood was carefully picked out, cut, smoothed, shaped and lovingly put together for all eternity. Each component part is an integral piece of the machine. 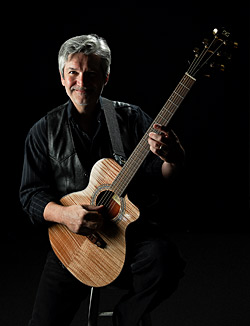 This is not an acoustic guitar. It doesn’t resonate like a real acoustic, but amplified you’d swear it was a real hollow-bodied acoustic guitar. Unplugged it will never emulate a 60-year old Martin, bur that’s not its task. It rocks live, will not feed back and has its own sound that I’m developing. It can’t fool my ears. In the studio, even with a Takamine or a Taylor, we still use a high quality condenser or two to get a decent sound.

The Viridis specifically is the answer I’ve been looking for, especially live. I play in a loud band and I play at home. I like to travel with my guitar. The Viridis is small, lightweight and plays and feels like an electric guitar. And with the pre-amp in the back, I can send a good signal down the line wherever I go.

Because the Viridis is new to me, and I’m learning its strengths, some new stuff is going to pop out of it. Just this morning, I was writing… and the instrument was taking me in some new directions. I can’t wait to nail some of these new songs down.

Since the Viridis doesn’t have tone controls on its surface, I just bought a DeMars XLQ preamp. Sure, there might be some higher-end preamps out there but this one packs neatly in the guitar case and runs off phantom power. It’s a quick, convenient no-brainer: plug and go. Since it’s a DI, I can send low-Z out to the board and a 1/4″ to an amp onstage. Plenty of torque, lots of EQ range. I can fine tune the guitar to fit the rig, amp or input. All good.

As for the signal path, I have two ways to fly. For a run-and-gun show, I just plug into the XLQ and let it fly. If I have more time, I set up a small modeling amp and add a little chorusing and light reverb, then send a tap direct off the amp in stereo. I still use the XLQ to enrich the sound. This is tricky… lots of gain-staging going on but I’m learning how to make this rig really sing.

What’s been the reaction of your bandmates to your Viridis? Your fans? Your techs/engineers? Producers? Other musicians?

It was a very slow warm-up for the bandmates. I think they like to think of me as the acoustic guy – kind of more for show than for sound. And to be honest, it took me some trial and error to get the Viridis up where I wanted it. The fans warmed up to it right away and I got many comments on this beauty. The band and crew are now coming around nicely. But, it was my bandmate Doug’s comments that hit home for me. He recommended the XLQ. It only took a couple chords before he started smiling.

I had a real good soundcheck at a gig last week – just me and the guitar and my engineer on a big rig. By the time we were done, we had it together. When I walked offstage after our set, one of the guys playing in another band on the show came right up and raved. He’s an acoustic veteran and he TOTALLY got it. He was very excited. And I haven’t met a guitarist yet who didn’t settle in on the instrument very quickly.

Something else I noticed during this summer’s tour with my band: fans were taking pictures of the Viridis in its stand! What!?!? The Viridis looks like it’s ready to rock. I like that.

Have you recorded with the Viridis yet?

Yes. Pull it out, plug it in and you’re instantly recording a songwriter demo. I found it works best for glassy, shimmery parts. I’ve had some success with double tracking a couple different acoustics playing the same part. The Viridis adds a nice sparkly top. I record right from the console. No bleed.

What about playing live?

On stage it cuts through the clutter. From the audience perspective it looks like and sounds like an acoustic guitar. AND they’ll hear it. It is the perfect instrument for an electric guitarist. No fat. No feedback. Just the sound of an acoustic guitar. You will rock, and you will stay in tune. On tour with my band it’s perfect. In rehearsal, it’s perfect. I’m still not convinced that it can stand alone on the solo acoustic gig. But remember, I’m old school. I have been traveling and playing a bit more lately as a solo. When I play without sound reinforcement, I usually bring my trusty Washburn acoustic and a small modeling amp, and plug in a looper and a little compressor driver.

Dan, you have solved a major problem for all acoustic guitarists in bands with your two-pickup system. That being the ability to play live and loud without feedback. And look marvelous while doing so. I’ve stopped comparing. The Viridis is its own beast. It has become my “go-to” axe. It is the one I travel with every day.

I’ve learned that the best way to choose an instrument is to play it – use your hands and your ears. Use the spec sheet to line your bird cage. Trust me, if you try a Viridis, and give it a good workout, you will understand what I’m talking about. I predict that the value of the Viridis will skyrocket. It’s built to last. It’s unique. And it’s American-made. I enthusiastically recommend this instrument.